THE PROBLEM WITH ENTRAINED AIR AND HOW TO OVERCOME IT

When an object travels through space, it will leave behind a vacuum, a space that is devoid of air. The void will quickly be filled with air as the pressure in the void is 0 bar compared to the pressure of 1 bar (at sea level) in the surrounding space.

The size of the force pulling the air into the vacuum depends on the size and the speed at which the vacuum is created. The bigger the vacuum and the faster it is created, the larger the force. A truck traveling at high speed will create a more forceful airflow than a bicycle traveling at low speed.

Traditional fire fighting equipment including fog nozzles spray large water drops that travel very fast. The force of the airflow that is created, will cause a lot of air to be entrained with the water that is sprayed into the fire.

This will feed the fire with oxygen slowing down the extinguishing process and giving poor control of hot smoke and gasses.

Vacuum and entrained air created by most fire fighting equipment

The Firexpress micro-drops vary in size. Although still small, will the vacuum created by the largest micro-drops be partly occupied by the smallest micro-drops that will be dragged along with the larger micro-drops, so that they also achieve a long spray distance.

The amount of entrained air created by the micro-drops and drawn into the fire is therefore minimal. 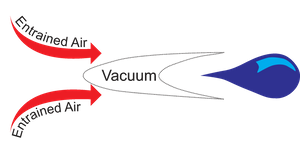