The Firexpress CAFS fire fighting backpacks are the optimal solution when the fire fighter has to go through very narrow passageways like corridors on a ship or staircases in a building to get to the fire.

The fire fighting backpack can also be the only solution if a fire hose for some reason cannot be put into operation e.g. due to a long distance between the point of operations and the scene of the fire incidence.

The system is mounted on a shield carried on the back of the fire fighter and is secured with a harness. The system can be delivered with an integrated face mask with an on-demand breathing apparatus.

The backpack is a powerful and compact unit which makes firefighting truly mobile. The ability to combine CAFS and micro-drops combined with the ability access confined spaces provide the fire fighter optimal fire fighting capacity and personal protection. The lance is a short version of the normal Firexpress dual lance, but with almost all the same features and benefits. The shorter lance makes movement easier in confined spaces. The Backpack is prepared for a second air bottle for usage with a breathing apparatus.

The lance used with the backpack is a shorter version of the normal Firexpress lance for easier manoeuvring in confined areas but with almost all the same features and benefits.

The system can be delivered with an integrated face mask with an on-demand breathing apparatus delivering air at a positive pressure of 8 bar. It has a pressure gauge measuring the pressure in the air tank. The pressure gauge has an audio alarm that is activated when the pressure reaches 50 bar. 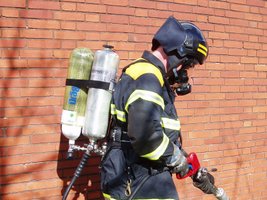 The backpack can be delivered with a face mask with breathing apparatus.